You have been warned, if you’re reading this and you’ve not seen Avengers Endgame that’s your fault.

For a number of years I’ve struggled with my weight, wanting to lose it, putting the effort in, shedding a few pounds but ultimately failing for some reason. It’s a frustrating thing to want to do something but losing that momentum after a short while. I became lazy at some point and after 25, it’s piled on. For a long time I was ashamed at this happening to me, constantly blaming myself and the choices I made. Frankly I assumed my friends and family wouldn’t like me as much. What I didn’t realise until later is that I was still the same person. Still the same slightly annoying, funny (in my humble opinion) and chatty nerd I have been for as long as I can remember.

No amount of weight gained or lost will ever change that or how people see me and care about me. The same can be said for Thor, when we first see him in Endgame he’s the hero we’re used to seeing; confident, brooding and muscular. Hemsworth embodies Thor to a point that, like Rober Downey Jr. as Iron Man, there isn’t anyone else you can imagine playing the God of Thunder. It isn’t until later that we see the toll certain events have taken on him. After slicing off Thanos’ head in the first 20 minutes and failing to undo the Snap thanks to the destruction of the stones, each Avenger goes their separate ways. Five years pass when Groot and Banner/Hulk (Bulk?!) pay him a visit at New Asgard. The reveal of an unkempt and heavier Thor was certainly shocking and played for laughs at first, however after this there is a tremendous amount of pain and pathos.

There was a point when Thor was a one note character, the muscular hero who would always vanquish the villain somehow and do it in style. The worst we saw him is when he briefly pined after Jane in Thor: The Dark World only to be reunited with her soon after. Other than that not a hair was out of place on this God of Thunder. Even when his mother died in Thor 2 and then his father in Thor Ragnarok, very little emotion was shown. Not until his third solo outing did we see a slightly different side to him in part thanks to Hemsworth himself as well as director Taika Waititi, both of which wanted to take the character in a different direction. Stripping him of his signature hair, hammer and home did just that. It also gave Hemsworth a chance to show off his comedy chops, something which be clearly has a natural talent for. Then in Infinity War, we see how hard he’s had it during his chat with Rocket (aka rabbit) where he laid out all who had died and how it’ll help him kill Thanos. It didn’t. What it eventually did was push Thor into depression, PTSD and alcoholism. Think about that for a moment, one of the most powerful beings in the universe had severe mental health issues. No matter what caused it, it really can happen to anyone. Power on the outside doesn’t mean power within. 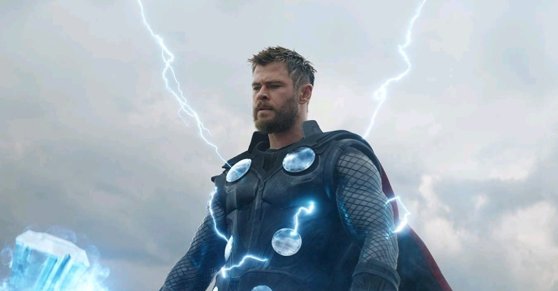 There are a couple of unfortunate comments in Endgame’s three hour runtime such as Rocket calling him tubby and Rhodey claiming he has Cheese Whiz coursing through him. Whilst it feels in character for Rocket, Rhodey’s off handed comment felt very jarring and unnecessarily harsh. Some may argue that this sort of treatment continues throughout Endgame however it seems to lean more on the alcoholic Thor who is suffering from PTSD. He breaks down right after hearing the name Thanos, he is reliant on beer, grabbing Banner with one hand and still clutching a beer in the other. Not only has it taken its toll on his physical form, his mental state has been severely damaged as well. Not killing Thanos when he should have meant half of the universe died, that’s one hell of a burden to bear.

As he continues with his narrative through the film, he’s subjected to other types of name calling including Lebowski but this comes from the nicknaming Tony Stark. Never does it feel like fat shaming. If anything there is a growing concern for Thor starting when we see him after the 5 year time jump, he’s desperate to be who he was as he clings onto his past when he mentions Jane, and that he is the one who killed Thanos. The pain within him comes out as he continues to drink and can barely hold a sentence together struggling to find the words.

There are two key sections which turn things around for him, both of which help him accept who he is rather than who he’s supposed to be. They are the scenes he spends with his mother when travelling back to Asgard in 2013 and the final battle. Seeing her for one last time knowing full well that she was about to die was a blessing for him and that’s how he took it. It’s here that Thor comes to terms with his failures, suffering and grief. Yes he killed Thanos but not when he should have. His death didn’t change anything and it’s this which causes him to retreat inside himself and drink himself into a depressed and bloated state. Some final words of wisdom from his mother (Rene Russo reprising her role) as she reminds him of who he is and that this hasn’t changed despite how difficult it may be to see. One lift of his hand as he summons Mjolnir and realising that he in fact still worthy is a beautiful cherry on top of a perfect scene.

Then the final fight. The one thing that they could have done which would have ruined it is making Thor ab-tastic again. Keeping him at this size is a clear indication this is who he is now, and that no matter how big or small you become, you are always worthy, you are always powerful, you are always mighty. And apparently lightning can plait your beard!

Endgame changed a lot about the MCU and the Avengers, killing off two of the original members, giving Captain America a happy ending and showing us a smart Hulk. The biggest shock and pleasant surprise came in the shape of Thor. Pushing the character into places we had never see him go, having to deal with the toughest time he’s ever had, coming through the other side and joining the Guardians of the Galaxy. A bold move which didn’t involve killing off the character. With Hemsworth reportedly signing on to carry on his Marvel life into Phase 4, as well as his now more developed character it’s nice to know we’ll have a familiar face sticking around.