A young boy called Miguel who dreams of becoming a musician is sent into the land of the deceased on Day of the Dead and he has until sunrise to return before he’s trapped there forever.

Death is a tricky subject to approach in any film, the aftermath is rarely given a second thought. It’s a refreshing beat to see Pixar handle it so well, whilst having respect for it’s audience of all ages it creates a world that will help those who are having a hard time explaining it and dealing with it.

The story begins with a monologue from Miguel (Anthony Gonzalez), a boy who lives in Mexico with his large family including his great grandmother Coco (Ana Ofelia Murguía) who is on the verge of giving in to her dementia. He explains that after his great great grandfather walked out on his wife and daughter to pursue a career as a musician, all forms of music were permanently banned. He dreams of becoming a musician like his late hero Ernesto de la Cruz (Benjamin Bratt), who was considered to be the greatest singer of all time but died under the weight of a huge bell dropped on top of him. After discovering that Ernesto is the disgraced family member, he runs off to enter a talent competition and through a twist of fate he is sent to the Land of the Dead.

His journey sees him meet deceased family members world and desperate con artist Héctor (Gael García Bernal), trying to scam his way into the real world to see his family. The rule is if no one has put your photo up on Day of the Dead, you cannot cross over. The pair agree to help each other to see their families again.

Coco speaks directly to the world as it is now, it includes issues such as borders and immigration, where you are stopped from seeing loved ones if you don’t have the right credentials. For an animation to be so politically aware as well as dealing with a deeper understanding of mortality, whilst appealing to adults and children alike shows a level of sophisticated storytelling which many studios fail at. Going even further Coco teaches us aspects we may not know about this sacred day and that it’s about family and remembering those who are no longer with us. Basing it on Day of the Dead is more than just a random choice, it’s a chance to understand what this day means to those who celebrate it. 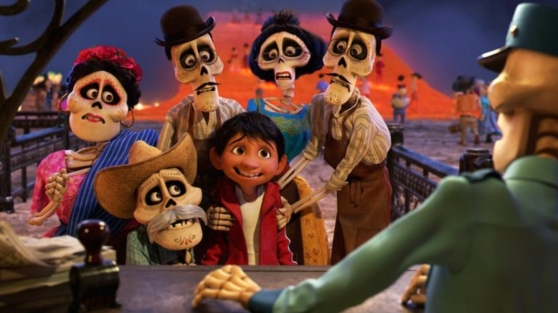 Whilst it sticks with the Pixar formula (our protagonist finds themselves in a difficult situation which they have to get out of before their time runs out), it works perfectly thanks to its difficult and moving moments. It’s not that Coco constantly plucks at the heartstrings for its emotional beats, it’s that it has these occasional riffs that make you think of the difficult questions about life. Containing some of the most beautiful scenery seen on screen that will leave you breathless, combined with a score by Giacchino which rivals his best work, it’s classic Pixar doing what they do best.